No doubt Golden Diamond's greatest asset is his strong breeding ability that he is able to transmit his great beef building qualities to his offspring. Tremendously great breeding potential is written all over Golden Diamond and many top breeders that see him are able to read his message.

Golden Diamond's calves were first shown in the 1964-1965 show season. seven of his first calves collected 114 points to give Golden Diamond a place on the active Register of Merit. for the next 4 years, 1966 through 1969, Golden Diamond was the top gainer. Each year his calves stood higher and won more points than the calves of any other Hereford bull to gain for him the top spot in 1969. 25 bulls, 37 heifers, and 4 steers, sons and daughters of Golden Diamond collected a total of 1295 points to make him the top bull on the active Register of Merit, the first polled bull ever to hold the top spot on this performance record for sires as designated by the American Hereford Association for all Hereford bulls, both Polled and Horned.

Golden Diamond responded very rapidly to good feed and has always been very active in the show ring and on pasture, many who see him remark how he moves out and is so active.

Golden Diamond has proven to be a very dependable breeding bull. He sires calves with size and scale. They are hearty and with that bred-in good doing ability. he has been proven genetically sound and has a clean pedigree. He marks his calves very well and has never sired a horned calf. Many inquiries that come to our ranch by Registered and Commercial breeders, are for either sons or grandsons of Golden Diamond and many sons and grandsons are out making names for themselves in some of the top herds of the nation. The reports that come to us is that like Golden Diamond, they are doing a great job of breeding and are able to improve herds with their superior qualities.

We here at OK Hereford Ranch are strong for the Golden Diamonds and are keeping in service several sons and are retaining most of his daughters for our cow herd. The Golden Diamond Cattle are the best cattle we have owned to date and are confident of their ability to do good in the future.

few bulls of any breed can match the performance record made by Golden Diamond. His accomplishments have all come so far before he was 9 years old. He has lived to see his own History made and his future looks very bright.

Many volumes could be written in the future about Golden Diamond as he adds to his already Great performance record. His calves have been proven superior in any test they have been subjected to and the future should hold even higher regard for him as more of his offspring makes more records, and more breeders have the opportunity to see the results of the ability of this great bull in their own herds. 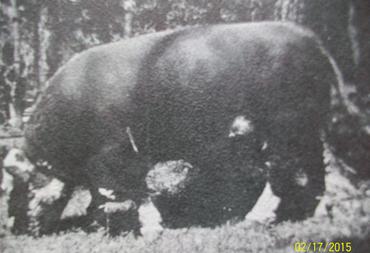 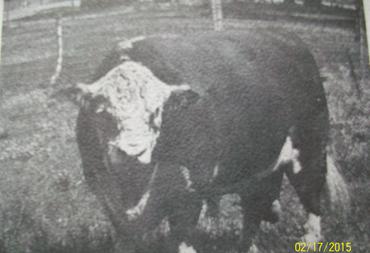 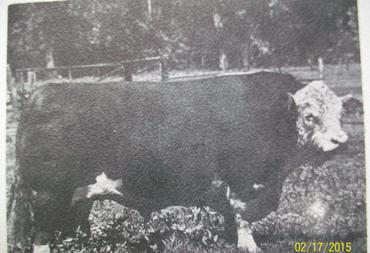 Golden Diamond showed exceptional promise as a very young calf. He was brought to the barn at about 3 months of age. He responded to feed very well and soon became almost everyone's choice of the group of calves.

He was specifically called Golden Diamond being out of OK Golden Miss one of the very top daughters of Gold Mine who made such a popular name for himself as a show champion, and the first Polled bull whose calves gained enough points to be a Register of Merit Sire. Golden Diamond's sire was Diamond who at the time was showing great promise as a top breeding bull and Golden Diamond's beautiful coat of golden colored hair.

Golden Diamond was first shown at the Montana State Fair in Great Falls in 1961, where he was Reserve Champion bull showing in the summer yearling class. The next 3 state fairs that followed Golden Diamond was named Champion Bull.

In the 1962-1963 show season Golden Diamond was shown 10 times as a two year old winning the class each time and was Champion Bull 9 times and Reserve Champion once being defeated only at the Western Stock Show at Denver Colorado.

Golden Diamond has always been very popular among Registered breeders and commercial breeders alike, almost the unanimous expression from people who saw Golden Diamond at the shows and later in the breeding pasture was "I LIKE THAT BULL". At the shows, Golden Diamond was viewed by many breeders of all breeds and a remark that was heard often was that from the middle of Golden Diamonds body to the rear end, there was not a bull in the breed that could match him. 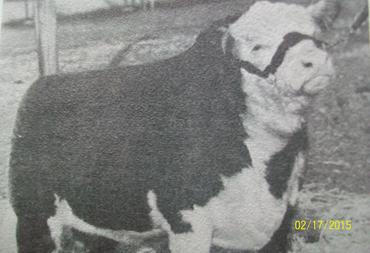 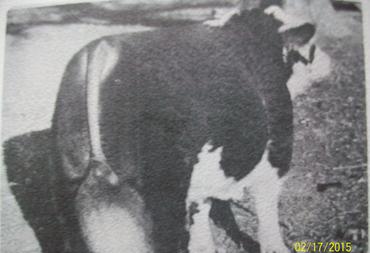 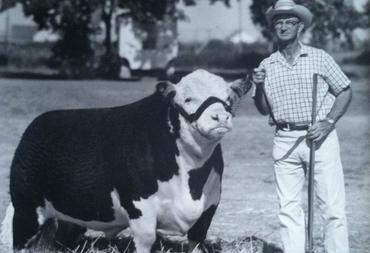