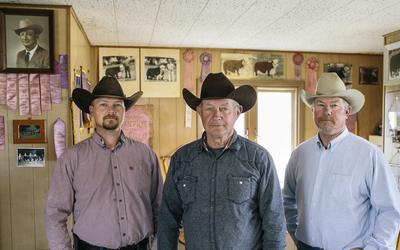 Heavy bone, heavy rear quarters, wide loins, strong through the shoulders and good heads prove they are "Bred for Beef." Using sons of these great sires you can expect Better Calves and Bigger Profits.

We welcome you to visit our ranch and inspect our cattle. 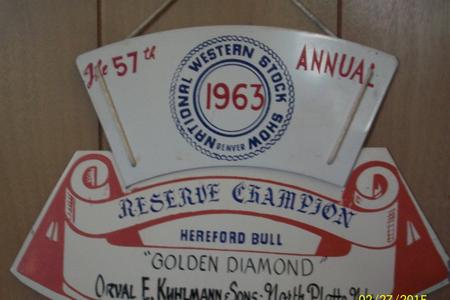 1963 in Denver (in spite of the fact he was a polled bull.) The following year Golden Diamond's brother, Mr. Diamond, won the same honor. Orvil's cattle won many shows across the nation in both the horned and polled divisions through out the 50's, 60's, and the early 70's.  Orvil dedicated his life to God and to making Polled Herefords a mainstream breed, and did quite well at it until his death in 1990.

The continuing philosophy of the Kuhlmann Ranch is to provide quality and consistency as we have for nearly 100 years. Orvil's eldest son, Ernie, runs the ranch the same way his father did, striving for excellence. Ernie's only son Kevin lives and works the ranch alongside his father. Kevin's son Anthony is the fifth generation to work the ranch. Anthony is currently raising the 6th generation of Kuhlmann sons, teaching them the legacy of Orvil Kuhlmann.

In 1938 his oldest son Orvil purchased some of his fathers land around Scouts Rest Ranch and began his own Polled Hereford ranch.

Orvil wanted to change the way the world viewed Polled Herefords, so he took to show road. He wanted everyone to see

the polled cattle he had were just as good if not better than the horned breed in the show ring and out on the range. In 1945 Orvil's bull, Golden Nugget, sired a calf like none other. He knew right than it would be a champion, naming the calf Gold Mine. Gold Mine was the first National Grand Champion for Orvil in 1946, really putting Orvil "on the map". Orvil added the line of Domestic Mischief in the 50's when he bought a bull calf that he renamed Diamond. He breed this line to his Gold Mine cattle and the results were amazing yet again. Diamond sired Golden Diamond who was Reserve Grand Champion in the horned division in 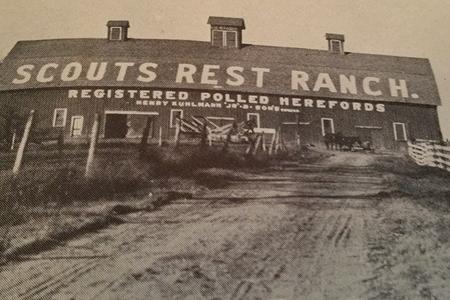